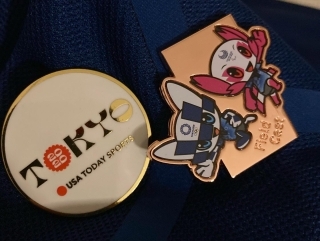 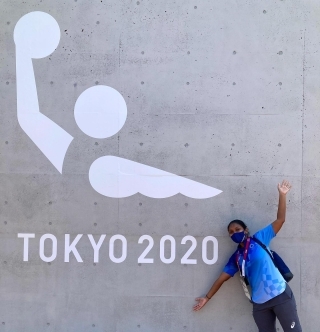 As the final medals were placed around the necks of the athletes; the volunteers were busy arranging the stage for the press conference which soon followed. We made it to the end of the Olympics! The entire event spanned only 16 days but each of those days were packed with excitement.

My journey to becoming an Olympic volunteer began in 2019 with training sessions, guidebooks and interviews highlighting the vision of the games “Unity through Diversity.” Tokyo city transformed itself during the years leading up to the event and even without international spectators we were all committed to holding a safe and successful Olympics.

The day came to collect my uniform. The Japanese government was committed to making the event as sustainable and environmentally friendly as possible, so the uniforms were made from recycled polyester and plant materials. Day 1 started off with meeting the diverse team of volunteers. Many were Japanese citizens living in Tokyo, others were from Taiwan, Korea and New Zealand studying at Universities in Japan. Our team leaders were from Russia and Canada with plenty of experience under their belt as former managers at the Rio games. I waved my flag proudly and shared some facts about myself and my country during our team orientation session. Some of my teammates had heard about Trinidad’s Carnival and always wanted to visit, others knew the names of our star athletes and they all joined me in cheering loudly whenever one of our athletes competed. “Diversity through Unity” written on the walls of our training room aptly summed up the experience working with people of all ages, speaking different languages and from various countries working together as one team.

During the games, our volunteer team was responsible for assisting the media, journalist and photographers that came to cover the Water Polo events at the Aquatic Center in Tokyo. At one of the games, I managed to catch a stray water polo ball that was launched out of the pool almost knocking over the cluster of photographers lined up like pins in a bowling alley. After the medal ceremony, the volunteers helped with directing photographers to their positions and taking the athletes to their interviews safely. During the press conference the athletes shared their deepest gratitude to everyone involved in making this Olympics possible.

On the last day of the games, we could feel the rush of excitement seeing the medal matches and the tinge of sadness at the end of something unforgettable. We often hear about the “Olympic Spirit” and I used to think it was reserved only for athletes but as the Olympic creed states “the most important thing in the Olympic games is not to win but to take part.”