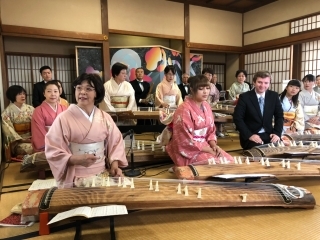 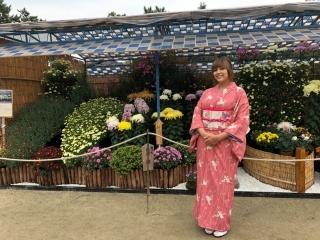 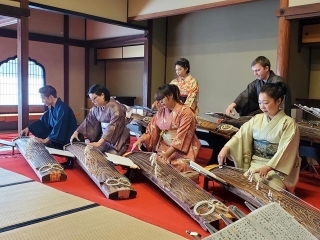 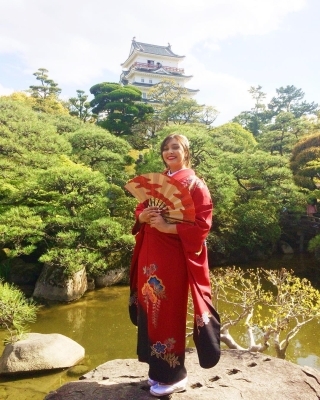 Originally imported from China around the 7th century, the koto, which belongs to the family of Asian zithers, evolved into the instrument it is known as today.  The koto is played with picks called tsume, that are placed on three fingers of your right hand to pluck the strings, while your left hand applies pressure to the strings to create different notes.
During a performance, a koto player sits behind the instrument in seiza, the traditional Japanese way of sitting, and is typically dressed in kimono or traditional Japanese attire.

Fukuyama City where I was situated is known for its koto production with 70% of all kotos in Japan being made there. Every year on the Fukuyama Castle grounds, I was able to take part in multiple koto performances. Truthfully, before coming to Japan, I had never actively learned to play an instrument so I was hesitant at first; but with some encouragement from friends, I gave it a try and fell in love with this instrument.

For approximately three years I was able to learn under the guidance of my wonderful koto teacher, who with patience that had no bounds, taught me to play and perform. As part of my learning experience, I was taught how to read the sheet music in Japanese, how to dress in kimono, and performance etiquette when upon a stage. I am truly thankful for the time that I spent learning to play this wonderful instrument and it truly was an invaluable experience to me full of precious memories I will always cherish.
.