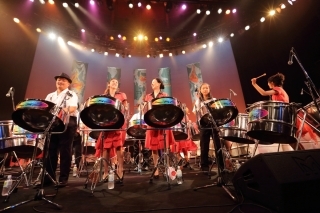 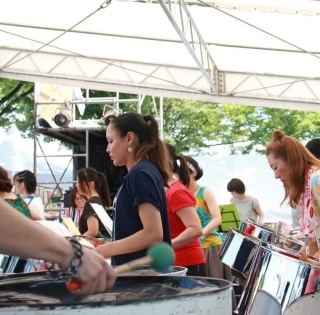 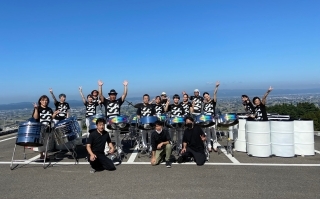 In 2017, seven months after arriving in Japan, a chance meeting at a music festival led to one of the most memorable parts of my stay in Japan.

It was a beautiful day in August when my friends and I decided to attend a small town music festival known as Sukiyaki Meets the World. After a few hours of enjoying different performances, we were about to leave when I heard it; the unmistakably sweet tones of a steel pan. Turning around, I watched in amazement as a group of steel pan players launched into an energetic performance while the crowd whipped out Trinidad flags and began waving to calypso and soca. At the end of their performance, I asked my friend to introduce me to the players. I asked if I could join the band and was a little surprised when they agreed.

Honestly, I’d never thought of myself as musically inclined. I don’t even know how to read music. When I get a musical score, until I hear someone else play, I have no clue what my piece ought to sound like. I spent the first months of practice observing other players and confused by what I was supposed to be playing. Trying to hit the right notes was like a game of musical whack-a-mole, but after a lot of practice and encouragement, I figured it out.

Sukiyaki Steel Orchestra plays at various small events throughout the year, with our two main events being the Sukiyaki Meets the World Music Festival and the Kobe Steelpan Carnival. A lot of work goes into every performance whether big or small. For a month before the two main festivals, we practice every night from 8 to 10. In the months leading up to my first music festival, I often felt like quitting. Our band had to learn new songs in a limited time, I felt tired, frustrated, and anxious that I was slowing down the rest of the band. Despite that, after experiencing the thrill of performing at the festival, I was glad I stuck with it. When I am onstage, there is a sense of rightness or perfection as each player is in sync. In that moment, playing the pans seem effortless.

I had never appreciated the complexity of a steel orchestra till I saw it firsthand. Each song we play is made up of layers – each section like puzzle pieces that have to fit perfectly together. We must memorize all our music and our band leader makes us rehearse problematic parts again and again. It gave me a deep respect for the effort and talent that must go into larger bands back home and the way they are able to produce quality arrangements each year. Steel pan is also an extremely versatile instrument. The Sukiyaki Steel Orchestra has performed with artistes from around the world and we play classical music, calypsos, Japanese songs, pop, Latin music and soca.

Most of all, I’m amazed by how the love of steel pan brings people from different cultures together. Sometimes, I have no idea what is happening around me and there are cultural differences in the way we react to certain situations. However, I feel that I am part of a team. We work together setting up the heavy instruments for our performances, share the joys and challenges of learning music, and enjoy smaller events in our lives, such as the marriage of a bandmate. I believe this sense of inclusion and camaraderie are essential to the steel pan community whether in Japan or Trinidad. When I talk to my bandmates or other Japanese pannists who have traveled to Trinidad to perform during Carnival, they often describe the hospitable welcome they receive there.

Personally, it has helped me to be an active part of a community within Japan. My bandmates have shown a great deal of patience and understanding towards me. Despite the language barrier, they try to include me in all activities and show small acts of thoughtfulness such as ensuring I always have a ride home from practice or events. Though some may find it ironic that I left the birthplace of steel pan to learn how to play it halfway around the world, I couldn’t have asked for better teachers.